How do you organize your story ideas? 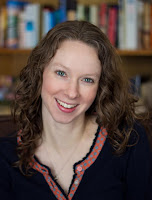 Stephanie writes young adult contemporary novels and is the creator of GoTeenWriters.com. Her novels include The Reinvention of Skylar Hoyt series (Revell) and the Ellie Sweet books (Playlist). You can connect with her on Facebook, Twitter, Pinterest, and check out samples of her work on her author website including the free novella, Throwing Stones.

Hope everyone had a great last two weeks. I know some of you got to meet Jill in Kansas City (so jealous!) while I was off trekking around the Tetons and Yellowstone National Park with these cuties:


Though somehow I managed to put in an appearance at the One Year Adventure Novel Summer camp as well...


Wherever I actually was, it's nice to be back home.

Several writers in the last month have emailed to ask me about how to keep track of story ideas. 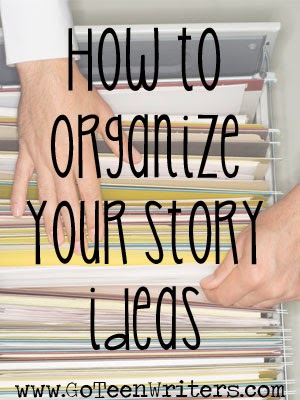 Until recently, I never had a good system for organizing my story ideas. I think better with paper and pen, so typically I would scratch a few notes on a scrap of paper. I might type up a few things or I might just stick it on my corkboard, but I didn't have a system for hanging onto or fleshing out story ideas.

In the last few weeks, I've worked hard to change that. I went through the writing folders on my computer and found that I had stuck my ideas everywhere. Sometimes I had created an entire folder for a story idea that was nothing more than a sentence. A few ideas were inside a document labeled "Blips of ideas." Some were in documents within the folder of their genre. It was a big mess, and here's how I went about organizing myself:

Step One: Create ONE place to capture your "blips" of ideas.

I'm talking about those random writer ideas that pop into your head. Where you're like, "What would happen if I tried to combine Pride and Prejudice with Zombies?"

They're not full-on book ideas. Maybe it's just at title or a social issue. Or one of those, "What if this happened?" thoughts.

Even though I think better on paper, I want to keep track of my ideas on my computer since that's where I do my writing. So I created a Word doc entitled "Story Ideas" and keep it in my writing folder.

The first page is titled "Blips of ideas." 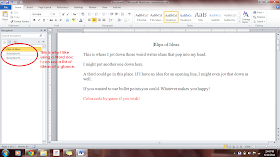 Step Two: Create a place where you can flesh out an idea.

Once a story idea is more than just a few sentences floating around in my head, I'll give it its own page within my story ideas document: 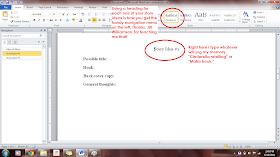 Where it says "Story idea #1" I'll put whatever I need to jog my memory about the idea. I use the "heading" feature in Word so that I can get that nifty navigation bar on the left side of the screen. Jill taught me how to do that because she's kinda the greatest.

As you can see from the image, I give myself a place to note any possible titles, to work on a hook sentence (i.e. When such-and-such happens to my main character, they must do this in order to achieve that.), and to write out back cover copy. Sometimes my ideas even come to me as back cover copy, so that might be where I start.

Or sometimes all I have are general thoughts about the story, like the theme or a character name or something the character could discover near the climax of the story. Any thought I have, I write them down.

When does a story move out of the idea document and into its own document? When I've started writing the book. I usually don't start writing a story until I have an idea of the first line and how I want the opening scene to play out.

Once I start writing the story, the book gets its own folder. I have a "Writing" folder on my hard drive and then stories get filed either under "Young adult" or "Adult." Breaking them out by genre just makes my brain happy for some reason, but you should do whatever makes your brain happy. There are probably as many different organizational systems of manuscripts as there are writers. I asked a few of my friends just to see how they do it:

Jill Williamson: I keep all mine on a flash drive and back it up on my computer. The flash drive has a folder for writing, and inside that is a folder for each series idea, inside that, each book. I also have a shelf of manila folders labeled with each series title in which I keep all my ideas/maps/character pics, etc. I don't have a folder and a computer file for every idea. The computer files are only for the ideas that I've started to write. But I have paper folders for all the ideas I've started plus dozens of ideas I haven't started writing. I just like to have a place to put things when ideas do pop into my head.

Shannon Dittemore: I have a folder on my computer desktop called WIPs. Inside that folder are word docs. Some are stories I've set aside for the time being and others are just scribbled out ideas. Whenever I have a story I want to work on later, I try to open a word doc and get the ideas down. If I don't, I will absolutely forget them. I get story ideas most often during worship services and I'll scratch them out on a bulletin as soon as I can, but if I don't retype them on my computer when I get home, they're gone.

Melanie Dickerson: I open a new folder for each new book. In that folder I put all the files pertaining to that book, like character names, deleted scenes, early drafts, synopsis, proposal, etc.

Of course not all stories that I start become books. And that might be for any number of reasons. Like:
So that's how I keep track of my story ideas and keep them (somewhat) organized. What do you do?