The Evolution of a Fantasy Map

Jill Williamson is a chocolate loving, daydreaming, creator of kingdoms. She writes weird books for teens in lots of weird genres like, fantasy (Blood of Kings trilogy), science fiction (Replication), and dystopian (The Safe Lands trilogy). Find Jill on Facebook, Twitter, Pinterest, or on her author website.

You all know my book is due soon. I'm on my final week. My editor emailed for cover ideas, so I had to set aside some last-minute editing time to gather all my ideas into one file to email him. That meant I needed to finish my map and the flags for each realm if I wanted the cover designer to have the opportunity to use any of it on the cover.

It was a lot of work. Art doesn't come easily to me, but I've learned how to cheat in Photoshop. Now, I had most of my map done. I'd been working on it on-and-off all last year. I thought it might be interesting to show you all the evolution of this map.

King's Folly is loosely connected to my Blood of Kings trilogy, but it takes place 500 years before Achan was born. So when I first thought about my map, I wanted it to look ancient. I loved this ancient map of earth and started with it as my inspiration. To explain what you're looking at, Africa is red, Europe is the yellow on the top, Asia is green, and Antarctica is the yellow on the bottom. Isn't that fun? 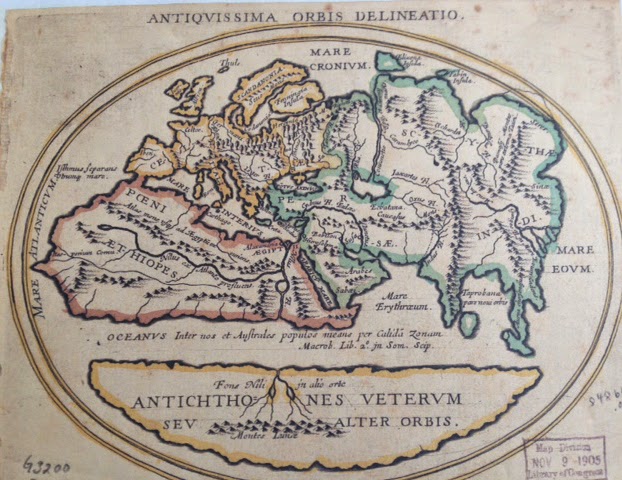 Inspired by that ancient map, I drew this on tracing paper with a pencil. Since the hand is a sacred symbol in my land, I originally thought about making my continent sort of hand-shaped. That never really happened, though. 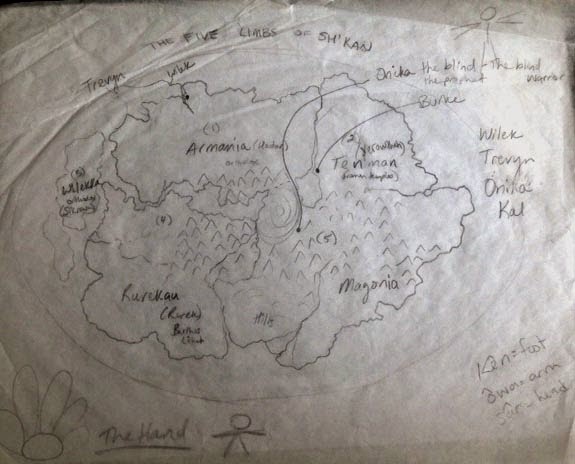 Once I was happy with the shape of my world, I re-traced it with a fine-point black Sharpie. I liked how that original ancient map had each continent in a different color. I started to add yellow here, but didn't like how it was looking. So I scanned it like this and opened it in Photoshop. 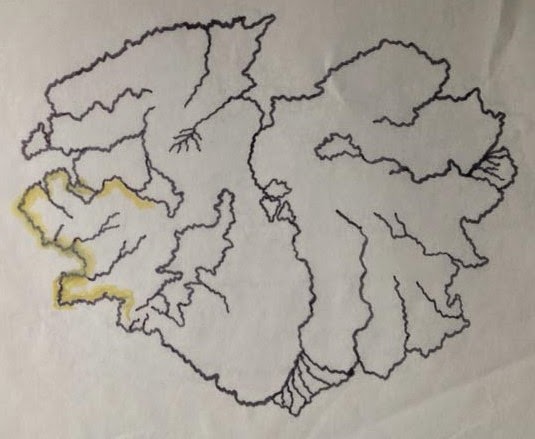 This next image is my cleaned up version of the previous image. I added colors here, though I never printed a color version. I took this and added my cities and other things I felt were missing. 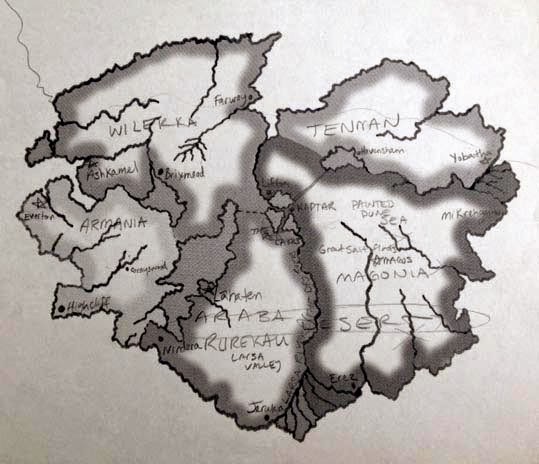 Then I added those things in Photoshop. 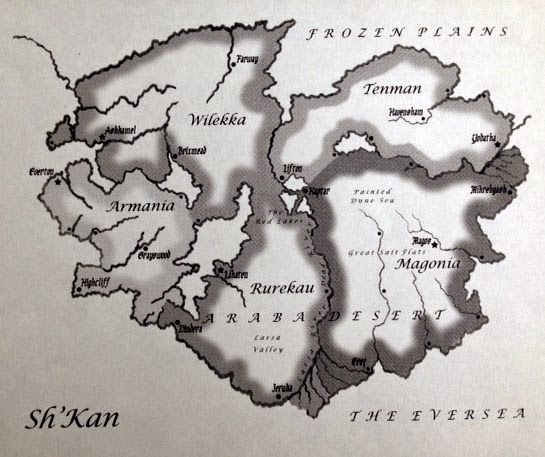 I was liking this so far, but I decided to get rid of the colors shading in each realm since I knew my map would be printed in black and white.

Also, I felt like my canyons looked like massive lakes. So on this next version, I added a key to show some important worldbuilding elements. The dots indicate where canyons were. Since there is no fresh surface water in my world, I added dotted lines to indicate underground rivers. I also added The Gray, which are foggy areas where beasties live. And I added more cities too. I also started thinking about the flag for each realm, what might be on it, and what their colors might be. 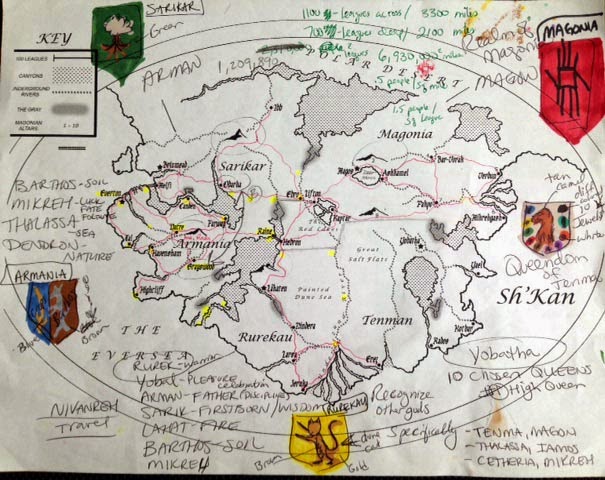 That's when it hit me that my map was upside down. This continent is in the southern hemisphere, so I can't have a polar desert up by the equator! So I flipped the whole thing in Photoshop to see what it looked like with the polar desert down by the south pole, where it should have been from the start. I had to move all my text, one layer at a time. Whee! 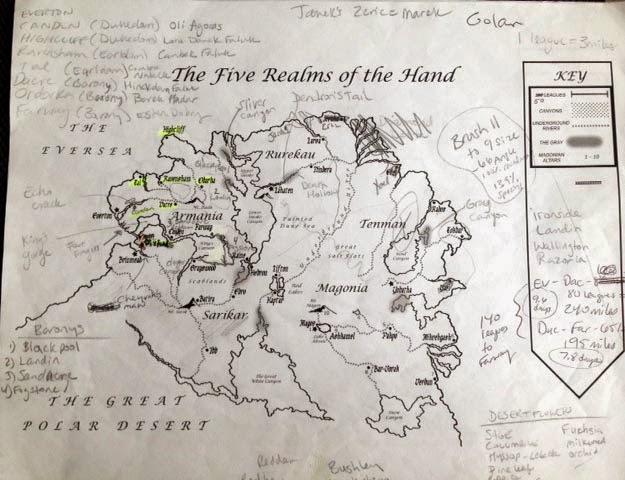 As I was writing the book, the more I thought about the actual distance these people were traveling, I decided to make some more changes. Reluctant ones, since I'd already put in SO MUCH TIME on this map. First, I switched my distance from 100 leagues to 50. Then I decided to change the shape. I stretched the thing out in Photoshop, and copied and pasted things until I liked what I saw. 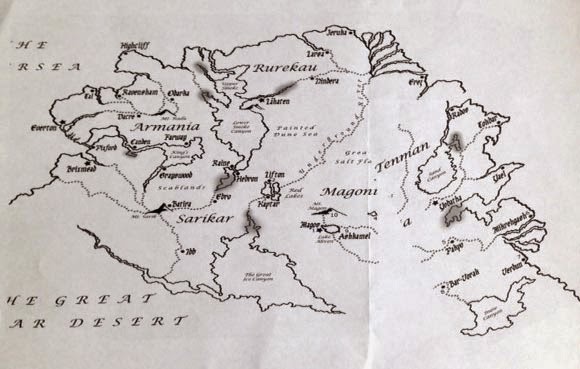 The other thing that had been bothering me from the start was that you couldn't tell that pretty much this entire continent has a raised elevation. It is supposed to be surrounded by cliffs! So I decided I needed a new outline (again reluctantly). I drew a new outline on tracing paper and added cliff marks. I purposely left them all out of proportion, figuring that the map was supposed to be ancient, so the odd proportions might work just fine. 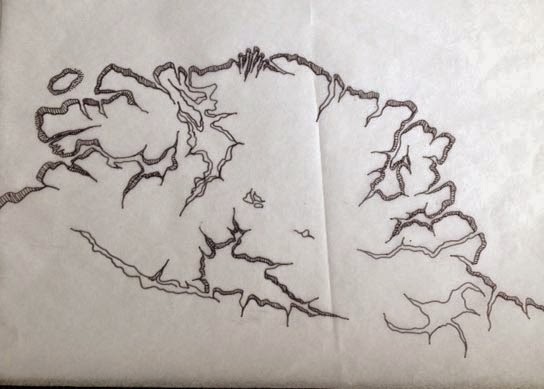 I scanned in my new outline, cleaned it up, pasted it into my Photoshop map file, and hid the old outline layer. I had to move all my text and dots and mountains and rivers again. But once I got them all in the right place, I liked it. I decided it needed an old-timey border, so I found a vintage one, then re-drew it myself. 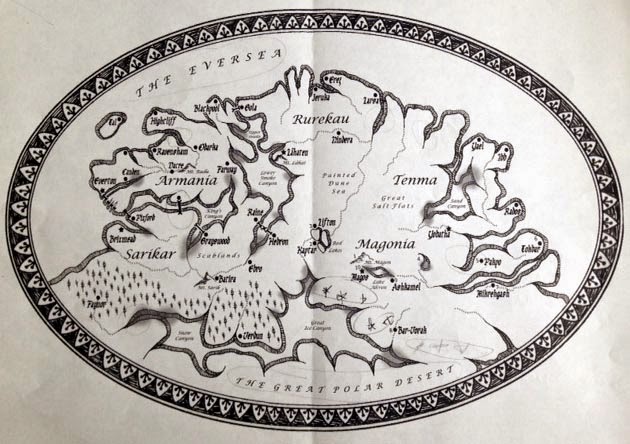 BUT---yes, there was yet another change coming. I wanted to put the flags for each realm on the map. I made these in Photoshop as well. But they looked way too busy over the coolio vintage border, so I hid that layer and kept a simple oval line. I brought in my flags, created a new key, and shifted everything about until I was happy.

And then was I ever happy to be done!

This is pretty much the process I go through with every map. It takes months for me to fiddle with it, to decide what I like and don't like. And as I write the story, things change and I make adjustments. I realize that this process is not for everyone, but I really enjoy it and thought you might find it interesting.

I also want to point out that part of this is likely why many fantasy novels don't have maps in them. It's terribly time consuming. For a publishing house to pay an artist to do this would be very expensive. It would likely cost as much or more than the full cover design. So maybe I should give more grace to those books without maps, huh?

Any questions? If you create maps, how is your process similar or different from mine?